Hermann J. Muller standing in a field with his wife, Dorothea Kantorowicz Muller

Date
1963-08-23
Identifier
HJM/02/HJM02-0024-001
Location
Collection HJM: Herman J. Muller Collection (1907-1982)
Series HJM/02: Photographs (1907-1982)
Author/Creator
Muller, Helen
Subjects
Muller, H. J. (Hermann Joseph), 1890-1967
Muller, Dorothea Kantorowicz
Hiking
New York
Description
This picture was taken by Helen Muller (daughter of Hermann and Thea) at about 4:30 pm on Aug 23, 1963 near Elk Lake in the Adirondack Mountatins in upper New York State. It shows Hermann (Joe) meeting Thea just after his descent from Boreas Mountain, which he and Helen (who had become 19 that week) had spent the day in climbing. His last climb before that had also been up Boreas Mountain, in August 1943, with David (his son who was then almost 19). The top of Boreas is only 2,000 feet above the lake, but the way is steep and rough and on this year’s climb there had been a violent thunderstorm that began while Hermann (Joe) and Helen were on the fire tower at the summit. In each case, Thea had waited patiently (?) at the foot, gathering pine cones for Christmas decorations. (Elof Axel Carlson, Indiana University Hermann Joseph Muller Memorial Tribute Booklet)
Archivist's Notes
HJMI Box 11, Folder 04, Item 09 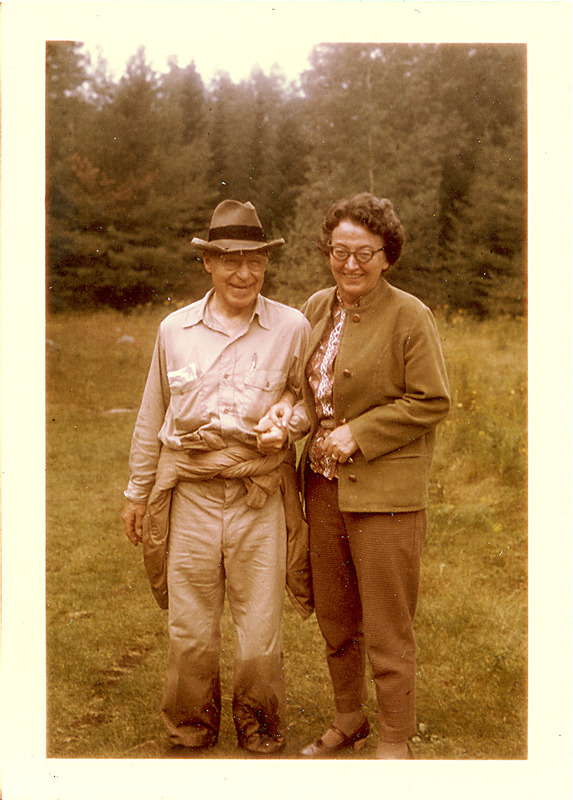